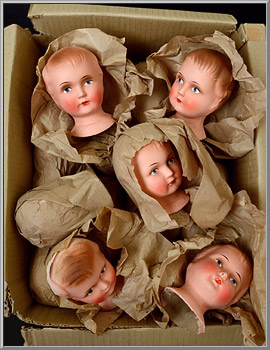 Vintage German Doll Head
Papier-Mâché ~ 4-3/4" ht.
Authentic Old Cardboard Doll Head
Made in Germany in the 1930's
Purchased from a traditional toy maker in Sonneberg, Germany back in 1991, these old stock treasures have been stored in our attic ever since! Just after the re-unification of Germany, we drove north from Coburg into the former East Germany to visit Sonneberg, which was the toy capital of the world in the early 20th century, and is still an important center of the toy trade. Now more than 90 years old, this vintage doll head is carefully gift boxed.
This large papier-mâché doll head with shoulder plate is made from two pieces of moulded cardboard. Featuring rosy pink cheeks and sepia brown hair, the eyes, eyebrows, lips and nostrils were all painted by hand. 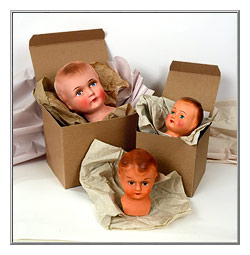 Each of our vintage doll heads arrives
securely packaged in a kraft gift box. 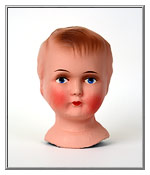 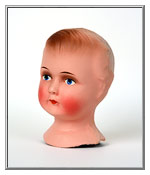 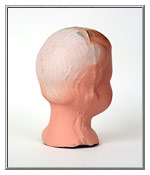